Home » Covering Letters » Should I Send a Follow Up Cover Letter?

Home » Covering Letters » Should I Send a Follow Up Cover Letter?

In a competitive job market, you want to make sure no steps are skipped when it comes to making your application stand out from the pack.

Sending a cover letter alongside a CV goes without saying. But when should candidates be considering a follow up cover letter, and why?

A recent article on Forbes.com stated, quite simply, “Following up on a job interview is crucial. Even if you blow the interview, it pays to get in touch after the fact.” But even if you don’t blow the interview, sending a follow up letter should be part of the process. It shows an employer a number of things:

Unlike the initial cover letter, a follow up after an interview is less formal. “The follow-up letter is almost like a proposal letter,” says Sarah Stamboulie, a New-York based career consultant.”You should tailor it to the company and suggest specific ways you can address the needs you discussed when you met.”

Your follow-up cover letter should touch on a number of important points that make you a stand out candidate.

Unlike initial correspondence, follow up letters don’t have to be typed. They can be hand-written, to show a more informal approach. It is acceptable to email a follow up, and unless the company has requested no phone calls, sometimes even a quick follow up phone call will do the trick. You can also send via mail, although many employers are on the fence as to whether sending snail mail provides a personal touch, or reveals a candidate’s lack of keeping with the times.

Your follow up letter should make clear that you understood everything that was discussed, and that you are still interested in the position. But you can also use it to share follow up materials, such as a portfolio. A great way to make your letter stand out is to include something in it to refresh their memory of not just the interview, but yourself overall. For example, I was discussing a news event with the HR manager during an interview, and she wasn’t familiar with it. In the follow up email, I reiterated my interest in working with the company, how my qualifications would benefit the company, and I also shared a link to the news story to remind her of the conversation. By standing out as an individual rather than a resume, your chances of being hired edge upwards.

You ideally want it to arrive in time before a decision has been made; driving home an impression of good manners and efficiency is a great way to help seal the deal. You should aim to send the follow up letter within 2 business days. Always get the business card of your interviewer and send it directly to them.

When the interview is coming to a close, ask about the next steps of the hiring process. Do they make the final decision? How many people does this need decision need to be run by? Are they at the beginning or the end of their hiring process? This will help you gauge when you should have a decision by, and consequently, when you should follow up if you still haven’t heard anything. Radio silence does not necessarily mean you didn’t get the job – I once had an HR manager rushed to hospital for an emergency operation after my interview, and needless to say, getting back to me wasn’t at the top of her list of priorities. If you know or feel, based on the interviewer feedback, that you should have heard back by now, take the initiative and send another polite reminder. This can often be a shorter email query, sometimes framed in the form of a question. For example, “I just wanted to make sure you had received everything from me that you needed to make your decision?” Or, “I just wanted to see if a decision had been made, or if my candidacy was still under review?” Keeping it short and sweet and well timed will yield better odds than several pesky phone calls every business day. 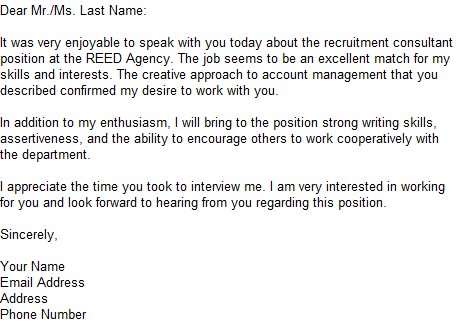 Even if you aren’t successful, send a follow up letter or thank you note anyway. It will leave a great lasting impression within that organization, but furthermore, it could lead to you being positively recommended to and hired by another one. Just because you weren’t the right candidate that time, doesn’t mean you’re not the right candidate. Ending the interview process with a professional, friendly note will open the door to other opportunities going forward.