Unlike Facebook or Twitter, LinkedIn is a network of professionals. While a picture of you in a state of inebriation is acceptable by Facebook’s standards, it won’t have a particularly positive reception as far as your LinkedIn connections go. There are quite a few taboos that could bring your profile down completely and make people turn away if they were browsing with a view to recruit. Here are the no-no’s that you should avoid at all costs. 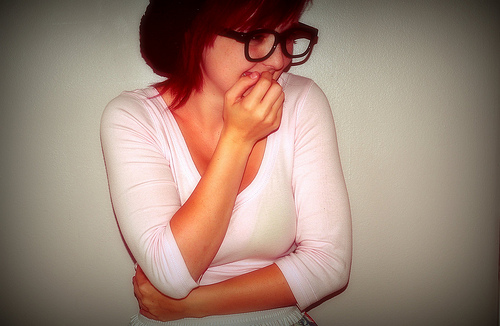 By all means take your own picture, but don’t do the whole ‘camera phone in the mirror’ trick that was popular on Myspace. It’s outdated and unprofessional. Keep hands and arms, and any clue that indicates a self-photo shoot, out of the frame. Just ask someone else to take it for you!

Photos with these qualities aren’t just offensive and annoying to look at, they actually look bad. The grainy appearance usually occurs in photos taken in dark rooms where the flash didn’t give enough light. Turn the light on or engage the flash. Sometimes, a photo can become pixelated when you crop others out of an image and resize yourself. The picture distorts and the pixels enlarge, which makes you look like a badly-taken poor quality CCTV print-off. Blurring can be avoided by keeping the camera still. Rest it on a surface or tripod for best results.

Going back to my last point, it can ruin a photo. If you are an artist or something that warrants such creativity, it is marginally acceptable. For everyone else, it is just awful.

A photograph that could be likened to your passport image can portray you as incredibly boring and won’t sell you to a potential employer. Choose an interesting location, keep it light-hearted with a bright friendly smile, and try and get some of your personality into the picture, even if it is through your clothing.

…But Not Too Wacky Either

Psychedelic, wacky images are funny for social networking with friends but if you go overboard and dress as a giant Crayola clutching one of the Bananas in Pyjamas, this will give off the impression that you can’t be sensible or serious. Find the balance.

Inappropriate To Your Job Or Industry

How do you want your connections to view you? If a potential employer looked at your profile, what would you want them to see? Think about that when you try and work out whether your profile image is appropriate to the industry in which you work. If you are in a creative line of work, such as graphic design, it’s a little more acceptable to have a creative image. If you are a model, using one of your most exotic images from an excellent shoot could show just how versatile you are and earn you more work. But if you have a career which requires a much more serious or solid image, such as a lawyer, funeral director, accountant or you hold an upper level managerial role, your picture should reflect this, making you appear trustworthy, sensible and professional.

Images enhanced with Instagram-type effects are becoming much more popular with the rise of social media, but there is a time and a place, and unless it actually enhances the image to a professional standard, you should use the original file. Turning a picture black and white for no apparent reason will not make it appear timeless, classic or distinguished. It will just make it look pointless.

While showing that you can relax and socialise via your profile picture can be a positive image to portray, an image of you clubbing in tiny outfits covered with face pain and a beer hat will give off a completely wrong impression all together. Keep the location subtle, relaxed and light, and put down your drink if you plan to put the image on LinkedIn.

No Image At All

Without a picture, your profile looks incomplete and people will simply skim past without reading further. You need to have photographic representation on yourself, so that people looking for you will know they have the right person. As long as it doesn’t breach any of the taboos in this post, it should be acceptable.

Using an image that does not contain your face is a bad idea. Along with this, there are also some things you should never EVER put as your profile picture. These concepts include:
Your business logo (Make a page for your company instead)A picture of another part of your body (this is not appropriate at all and will give a terrible impression)A picture of someone else A picture containing nudity or pornography A picture of a landscape or scene A picture in which you or someone else is engaging in illicit activities such as drug use or crime.